Making our what seems like daily trek to WalMart, the beggar is hard at work on the corner. I don’t know if he’s there everyday (because, contrary to what it seems like, I do not really go to WalMart everyday), but a lot of the days I do go, he’s there. I’m not even sure it is just one guy. I think there are a few who take turns. Can’t be sure though because I never look close enough for long enough to be certain. Prolonged looking would be staring and that’s rude. It would also make the chances of making eye contact greater, and then I’d have to feel guilty that 1) I got caught staring, which is rude, and 2) that I didn’t give him something. Of course, I don’t really need to make eye contact with him to feel guilty. That’s what I have my 10-year-old for.

My children are not accustomed to seeing this type of thing.  We live in a rural area with extreme seasons (read 90º+ with 80% humidity in the summer and -20º for days, and sometimes weeks, at a time in the winter).  My husband says it keeps the riffraff out, and honestly, he’s probably right.  Not that there aren’t homeless/jobless/hungry here, but they are largely hidden.  So much so, that when we visited Orlando a couple years ago I took this picture along the freeway because it was something we don’t see everyday–or at least we didn’t until recently. 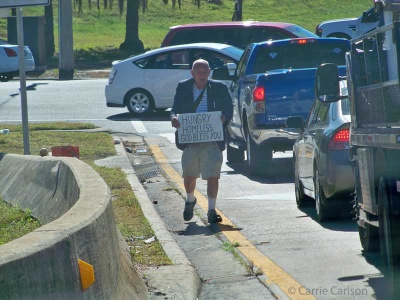 So, she sees this guy on the corner while we’re heading to the store and begins asking questions about why he always stands at that corner. I tell her it is because that corner is really busy and that increases the chances that he will get something. She says she feels sorry for him. And there lies the difficulty. I’m jaded, and she’s not, and I don’t want her to be.

She learns in school about the love of Jesus and helping those less fortunate and loving the least of these and knows nothing of the messy issues that make it so hard for many of us, even Christ-professing Christians who read the Bible and desire to imitate Him, to be able to extend ourselves to the guy begging on the corner. I don’t want to shatter her beliefs by telling her how he should get a job like the rest of us, get off drugs/alcohol, that the money he gets probably goes to things that aren’t good for him, and thereby imply that she shouldn’t feel bad for him because his own bad choices put him there (or more correctly, because I think his bad choices put him there–when it comes down to it, I don’t really know what put him there). I don’t want to tell her these things because the world needs people like her who take the message of Christ into the world no matter what the circumstances of those in need.

And, then there is the denial factor.  I do know that some people genuinely fall on hard times. But, none of us wants to believe we could be the one standing on the corner near WalMart with a cardboard sign and a bedroll waiting for strangers to slip us a buck. We want to believe they’ve done it to themselves, that they deserve to be there because of bad choices, and that helping them isn’t really helping but enabling. If we can convince ourselves of those things, then we can never end up there. Or that’s what we want to believe.

As we pass him again on the way home, I’m left wondering how to balance it all.  How do I extend help to those less fortunate without encouraging irresponsibility?  How do I teach my children about the very real evils of the world without making them jaded and unwilling to help?  Because the last thing this world needs is more people like me who look the other way.