The Prison of Numbers – Continued (Read Part 1 – The Scale  here)

After the scale, the next number we get all wrapped in is our jean size, or clothing size in general. As a side note, I’m old enough to remember that not too many years ago women defined themselves by dress size. Now it’s jean size. Hmm. Times they are a changin’.
Anyway, using clothing size to justify your self-worth—for better or worse—is almost as bad as using weight. Because women’s clothing sizes are non-standard, they vary widely from one brand to the next. Even within the same brand, and sometimes within the same product itself, sizes can vary widely. Part of the reason for this is the process used to cut the pieces used to assemble a garment can also cause sifts of up to an inch within a single size of a single product. Stacks of fabric are punched out with dies and the natural compression and bending of the stack during the punching process can mean pieces on the top of the stack are smaller than pieces on the bottom of the stack.

Here’s a quick little video about the history and frustration of women’s clothing sizes.

I’ve heard many women wish that women’s clothing was sized “standard” like men’s, meaning that your pant size would be measured by waist and inseam. Shirt size would be your neck or chest measurement. And it would be nice if it could work that way, but owing to the wide variety of differences in women’s shapes, it is possible for two women to have identical waists and inseams but not be able to wear the same size pants because of hips, or lack thereof and other shape factors. That dratted body shape again. The other thing hindering this type of sizing for women would be the stigma women seem to have about telling people things like their waist size. Can you imagine how women would react to having anyone be able to find out their waist size just by being able to look at the tag in their jeans? I don’t think it would go over well. Kind of like hip pockets are often tiny or just flat out missing in women’s pants. Can’t put them in there. They make you look fat. Seriously folks.

Putting letter on clothes instead of numbers is no better. Here are photos of my belts. They are both a size XL. Yep, you read that right. Both are XL. The smallest hole on the one is the same length as the largest hole on the other. 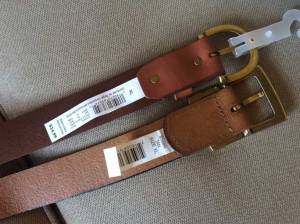 In using clothing size as a method of determining our value as a person, we are letting numbers and letters that are quite literally arbitrary run—or ruin—our lives. Sounds silly when I put it that way, doesn’t it?

2 thoughts on “The Prison of Numbers: Part 2 – Clothing Sizes”